Ha! I get linked from a comment and I see a spike in traffic.  Slashdot is the flow machine.  In any case, there are some misstatements in that comment that I'd like to answer.  First, I'm not "the guy from Microsoft behind Avalon."  Rather I'm one on a large team of developers.  My particular area is the graphics APIs.  Avalon is much more than just graphics.

Second, managed code is a different beast that unmanaged code.  While it can make programmers more productive and I totally think that it is the way of the future, a developer can write bad code in any language.  While right now I don't think that anyone would claim that managed code is faster than unmanaged code, the difference is generally not that great.  I've heard of some research that suggests that future JITs may be able to apply run time directed optimizations and recompilation that could make managed code faster.  But that world isn't here yet.

In the parlance of our time: "Just my 2 cents"

I'm done with my part of helping make WinHEC a success.  My talk went off pretty well and we got some great questions and comments.  I also worked the booth and showed industry and press people what Longhorn can do.  The big news for the WinHEC release is that we now have a start to our 3D APIs.  We had a couple of examples that show mixing 3D and 2D in a seamless way.  I tried to go out of my way to make sure that everyone knew that Avalon was much more than just graphics.  We are a full UI platoform that includes controls, styling, databinding, etc.

The main demo I was showing was a simulated "blood sugar tracker."  It essentially has a 3D bar graph in the background that slowly rotates.  Layered on that are semi-transparent buttons.  There is also a details panel that can come up that is semi-transparent and has another 3D scene hosted inside of it.  We have a vector graphic doctor icon in the corner that you can zoom in on to see that it is rasterized at the device resolution.  The really impressive thing here is that our demo team (a dev and a designer) took 2-3 days to turn this from an email idea into reality.  Robert and Nathan did a great job of showing the power of Avalon.  Here is a screen shot: 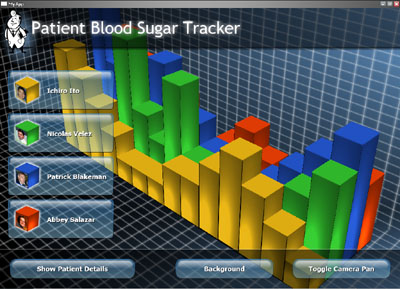